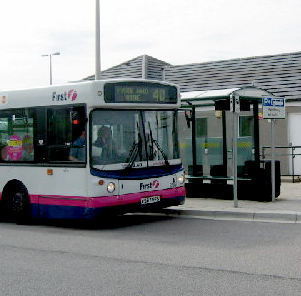 Kingswells/Sheddocksley Councillor Steve Delaney has lodged a Notice of Motion with the Council to be considered on 22nd August 2012.

It relates to FirstAberdeen’s decision to reduce the frequency of the Park and Ride service from Kingswells.

Steve said, “For reasons unknown to me, First appear to be intent on killing off the Park and Ride service. The reduced frequency and termination at Aberdeen Royal Infirmary has effectively turned it into a shuttle bus for hospital staff and visitors. It’s usefulness to commuters working in the City Centre and beyond has been wiped out”.

The Notice of Motion reads as follows:-

2. Instructs officers to seek a meeting with FirstAberdeen to emphasise the need for effective Park & Ride services in order to reduce congestion caused by commuter traffic and their role in achieving this.

3. Instructs the Chief Executive to seek a meeting with the Transport Minister and Group Leaders to discuss recent reductions in bus frequencies across the city and FirstAberdeen’s failure to deliver on local and national transportation policies in Aberdeen.

Councillor Delaney continued, “FirstAberdeen, as a company in receipt of the Bus Service Operators’ Grant, should be obligated to ensure their business plan is compatible with the delivery of national and local transport priorities. The grant is not meant to enhance shareholder profits, but instead to enable bus companies to deliver a quality public service”.

These changes look certain to result in more cars on our roads as commuters have little option but to drive to work in the City Centre as the service they need either fails to take them where they want to go or the frequency is such as to be useless for their working patterns.

Steve said, ” The Scottish Government has absolutely no understanding the difficulties which arise in in areas, such as Aberdeen, where there is little or no competition and a single company can be driven purely by profit with no regard to providing a public service. We need to get this message across to the Transport Minister and we need to get his commitment towards resolving the situation which has been allowed to develop in Aberdeen”.

“It is vital that both the Scottish Government and FirstGroup play their respective parts in delivering a public transport service in Aberdeen which encourages people to use the bus to travel to and from work, thus reducing congestion on the roads”.