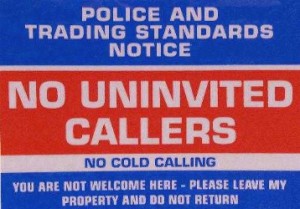 There have been reports of workmen cold calling and offering to clean or seal driveways. This has been in the Sheddocksley area but may spread elsewhere. Whilst this nothing new, this year the workmen are particularly persistent, often calling on the same address three or four times over a couple of days.

They tend to be dressed in reflective jackets and speak with an Irish accent. Residents have stated that a polite refusal is often insufficient with some workmen having to be told several times that their services were not required. In couple of instances a pickup type vehicle was being driven slowly up the street with the driver also wearing a reflective jacket and closely watching the activities of his colleagues.

Local Councillor Steve Delaney said, “I have received a report of an incident where one of these workmen became confrontational. I would suggest that residents do not engage the services of unknown workmen to carry out work for them regardless of price. Unless you use a reputable firm there is no guarantee of quality and there is no redress if things go wrong after the workmen have moved on. I have passed more detailed information to both Trading Standards and Grampian Police. My advice is to be wary about opening your door to workmen in reflective jackets over the next few weeks unless you are expecting them.”