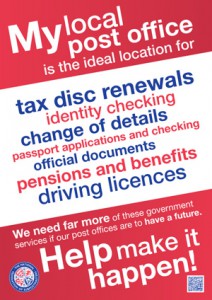 Local Councillor Steve Delaney is supporting the Post Office’s campaign to win the DVLA contract and its efforts to win more Government work. Post Offices provide a wide range of vital mail, financial and Government services to individuals and small businesses. Their presence boosts local shopping centres and they also offer an essential social service providing advice, support and information to all sections of the community, including the most vulnerable.

Steve Delaney organised a petition opposing Labour’s Post Office closure in 2004, gathering over 6,000 signatures. He fully supports the Post Office’s campaign to hold on to the DVLA contract and attract more Government business. He was written to the Minister for Transport, Minister for the Cabinet Office and Minister for Employment Relations, Consumer and Postal Affairs outlining the views of his constituents.

In his letters Steve said, “In addition to generally supporting the provision of Government services at local Post Offices, my constituents would particularly like the Government to support the Post Office’s bid to retain the DVLA contract, as well as the Cabinet Office to back the Post Office’s efforts to win new Government work”.

“I welcome the action that the Government has taken to date on the Post Office, and that unlike under previous Governments, there will be no systematic closure programme. However, several local postmasters and postmistresses have expressed the concern to me that the Post Office has already lost a significant amount of Government business, including National Savings and Investments and Children’s Bonus Bonds. I understand that the provision of Premium Bonds is similarly threatened”.

The decision is likely to be taken by Government in October. If you would like to support your local Post Office, they have cards they can give you to complete and send to your Member of Parliament urging him to write to relevant Ministers outlining your concerns, as Steve Delaney has already done. Fuller details of the campaign are online at www.nfsp.org.uk/DVLA_campaign.aspapmoney.org .