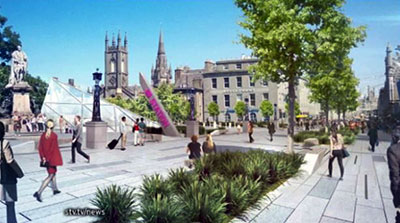 Following on from the Labour led Council’s decision to kill off the City Gardens Project in August 2012, not much has happened. The project was supported by a majority of the public, came with £50 million from the Wood Family Trust and was to be funded through a Tax Increment Finance initiative (TIF) which would have allowed the Council to keep income generated from new business rates to pay off the loan. The business case demonstrated the proposal was expected to cover its costs or better and Sir Ian pledges to underwrite any deficit to a maximum of £35 million. Reluctantly, we’ve moved on from that position.

Sir Ian Wood offered the Council until August 2013 to come up with something transformational, then extended this to the end of this year. This summer local architect John Halliday came forward with an alternative scheme (illustrated above) which involved relocating the entrance to the railway station beside the King Edward VII statue and partially raising the gardens, something which was less costly and was “in danger” of gaining all Party support!

At the August 2013 Council meeting, following Sir Ian Wood’s decision to extend his deadline, Kingswells/Sheddocksley councillor Steve Delaney lodged an urgent motion requesting the Council enter into talks with Sir Ian to determine if there was a possible way forward. Labour’s Lord Provost refused to take the motion on the basis that it was not urgent.

In October the Administration revealed their Strategic Infrastructure Plan which merely detailed projects which were already agreed, were ongoing or were being delivered by other organisations in the city. It offered very little by way of new ideas. As part of the proposals a City Centre Regeneration Board was set up and the Liberal Democrats suggested that both Sir Ian Wood and John Halliday be invited to join the Board. The Council refused to accept this proposal.

Steve Delaney said, “It was obvious to me by that time the Administration would struggle to meet Sir Ian Wood’s extended deadline, if indeed it was ever their intention to do so, yet they saw no urgency to progress matters. There was no foreseeable outcome other than the loss of £50 million unless they took action to try to secure an agreed way forward and did so expediently. Sir Ian has definitely moved from his previous position in recent weeks, yet there has been no evidence of Labour trying to meet him half way for the good of the city.

“The Liberal Democrats have pledged to work with all Parties to deliver regeneration of the city centre and we will do so in a constructive manner. However, I find it difficult to comprehend how we can deliver any transformational change after walking away from a £50 million donation and a TIF scheme which effectively covered its costs. Instead we now find ourselves relying on public money and much less of it than was originally on the table”.

At the Council meeting of 18th December 2013, the Liberal Democrat Group put forward a proposal that the Council

“agrees that, to ensure the greatest possible level of support from Aberdeen’s communities, the Council will undertake comprehensive public consultation and engagement as part of the process of developing the city centre masterplan”.

This was defeated 38-4 with Labour, SNP, Conservative and independent councillors all refusing to take on board the suggested commitment to consult widely. No surprises there!