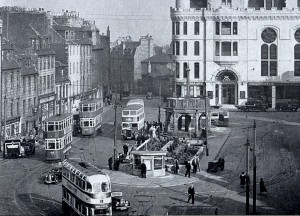 Kingswells/Sheddocksley/Summerhill councillor Steve Delaney has called for the Council to look into the possible benefits of re-opening the Castlegate to through traffic in order to support the pedestrianisation of Broad Street (from Queen Street to Upperkirkgate).

Steve raised this at a meeting of Aberdeen City Council on 5th March, along with a request for discussions to be opened with the developers of Marischal Square on substantially improving the views of Provost Skene’s House from Broad Street. In an otherwise tense meeting, both proposals were unanimously agreed with councillors calling for a further report to come back to a future meeting.

Steve said, “I’m very much in favour of full pedestrianisation of Broad Street to complement a new civic square, but not at any cost. We need to ensure that robust traffic management is in place and capable of handling any displacement of traffic resulting from these proposals, otherwise we’ll create gridlock in our city centre.”

“In order to ensure we get this right I’d like to see all options explored and that includes the re-opening of the Castlegate to through traffic. At present it’s a huge unused space and the current surface makes it very inaccessible, especially for people with disabilities. We need to model in the effect such a re-opening would make to the traffic impact in and around the city centre to establish whether or not this would help support the pedestrianisation plans”