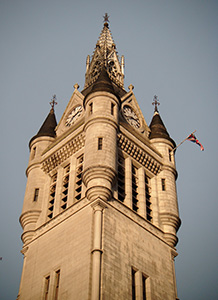 Events of the last few weeks have clearly demonstrated beyond the shadow of a doubt that Aberdeen City Council’s leaders are out of control with Cllrs Young and Crockett seemingly oblivious to the damage they are causing to the reputation of the city.

Former Prime Minister Harold Wilson once said, “a week is a long time in politics”. Perhaps Aberdeen’s Labour leadership should reflect on their former leader’s words as they look back on the damage they have inflicted on this city’s reputation over the past two or three weeks?

Last month at a meeting of the Convention of Scottish Local Authorities (COSLA), Aberdeen’s Finance Convenor voted against uplifting the funding formula for local authorities to take account of population movement. This would not have addressed the fair funding deal we have been campaigning for over a number of years, but it would have resulted in Aberdeen gaining an additional £7.5 million per annum in Scottish Government funding under the current scheme. Instead Cllr Young voted with Labour colleagues in Glasgow who would have lost out if the changes had been approved.

Local councillor Steve Delaney said, “This is worrying behaviour from the man who is in charge of the city’s finances. I agree with Cllr Young that Aberdeen is significantly under-funded and the funding formula needs to be revised, but turning down additional funding is pretty irresponsible. This was just an updating of the existing formula which would have, on this occasion, increased Aberdeen’s share.”

“By voting for the status quo, Cllr Young has accepted that Glasgow should continue to get more than their fair share at our expense! Following on from that COSLA have decided to re-visit this decision in April. Hopefully this time Cllr Young will remember to take his calculator with him and vote in favour of a better deal for Aberdeen, rather than toe the central belt Labour line.”

Moving on from the somewhat bizarre funding row, we had the banning of Scottish Ministers from Aberdeen City Council property. This all arose from an unauthorised visit by the First Minister to a school during last year’s Donside by-election, where he entered the school by a side entrance. The Council had written to top civil servants asking for the First Minister’s conduct to be investigated. The process had concluded with a tightening up by the Council of protocols for visits to schools during election times and a definitive response from the Civil Service advising that the only person who can investigate a complaint against the First Minister is the First Minister!

This was followed by Cllr Young and Cllr Crockett insisting and then denying that Scottish Ministers were banned. It was sounding a bit like a Punch and Judy show! What eventually came before the Council was a watered down proposal which fell short of an outright ban, but created a split in the ruling coalition, with them only winning by one vote.

Steve Delaney said, “This debacle has clearly exposed tensions within the coalition and a failure of the Council Leader to keep his Finance Convenor in line. It’s absolute lunacy to exclude representatives of partner organisations from visiting Aberdeen. Although there a different politics involved, Aberdeen City Council needs to work with the Scottish Government, the UK Government, European Parliament and a host of local and national bodies in order to deliver the best services we can for our citizens.”

” Anything less is no more than playing politics to the detriment of the people we seek to represent. We need to work as grown ups with our partner organisations. Cllr Young has thrown the toys out of his pram big-time on this. He is embarrassing our city with his antics and I fear this may cause longer term reputational damage and risk future investment”

“What the First Minister did was wrong, make no mistake about that. However it was no different to what Cllr Young did himself during the by election when he made an unannounced visit on the coat tails of a Member of Parliament to a Sheltered Housing scheme without either asking permission from the Council, or being invited by the residents.”

“As I highlighted in the Chamber last week, the right way to put this one to bed is not to embark on childish gestures, it’s for all of us to draw the attention of our Scottish Parliamentarians to the need for reform of their own governance arrangements. It is not acceptable that any individual be the last “Court of Appeal” in a complaint against him/herself. This could be easily remedied by setting up an independent body to look impartially at any complaint brought against this and any future First Minister. It’s not exactly rocket science!”

Outrage As Labour Starts “Campaigning On The Rates”!

Just as you thought it couldn’t get any worse, the Council Leader decides to send us all a letter promoting a political message, and charge us for the privilege! It is highly unusual for a Council Leader in Aberdeen to write to residents at public expense. This practice was introduced by Cllr Crocket last year, with previous Council Tax bills having gone out with a letter from the Chief Executive in order to avoid any political bias. Well, hasn’t Cllr Crockett really excelled himself this time with a message on the Scottish Independence Referendum promoting one side of the argument?

Steve Delaney said, “I agree with Cllr Crockett that Scotland’s future is better served as part of a stronger United Kingdom, but this isn’t an appropriate way to convey that message. Where I have difficulties is that I do not believe Council resources should be used for promoting any political Party or political point of view. In other words, political campaigning should not be funded by YOU.”

“There are lines that you don’t cross and clearly Cllr Crockett needs a new pair of glasses as he’s way over the line on this one. What are we going to see in the 2017 letter from Cllr Crockett? I suppose it will be a not so thinly veiled “vote Labour” message! Nothing would surprise we with the current leadership, nothing at all”.

“If I want to get a message out to the public, I pay for the literature myself, I always have done. I have no issue with Cllr Crockett promoting the Better Together campaign and indeed I’d be happy to join him in doing so. My issue, and that of thousands of Aberdonians, including Labour voters, is expecting YOU to pay to read that message.”

“The Better Together campaign could well do without Cllr Crockett’s unhelpful assistance. Nobody should be allowed to use public funds for political purposes, even if you agree with the message they are promoting. Otherwise, it’s the thin edge of the wedge and he who controls the Council, controls the distribution of information. The cumulation of this was when Cllr Crocket decided that a debate on his conduct over this issue would be held in private, excluding Press and members of the public. Surely this is how we would expect a dictator to behave, not a democratically elected politician?”

The last two weeks in Broad Street Towers were certainly more entertaining than Eastenders, Coronation Street or Emmerdale. Soaps are meant to be a distraction from real life. Politics is meant to be about real people and doing the best we can for those we represent. Somehow our leaders appear to be confusing the two, making Aberdeen City Council a laughing stock. This does not bode well.