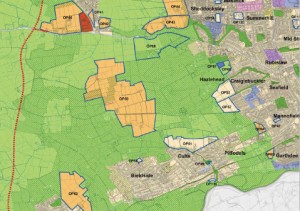 The Countesswells Masterplan was approved as the basis for further consultation by councillors on 13th March 2014. The consultation will commence on 17th March 2014 and run for 6 weeks.This is the precursor for planning applications for 3000 homes to the south side of the A944 between the Lang Stracht roundabout and the Kingswells roundabout.

Local councillor Steve Delaney spoke on the Masterplan at committee. He commented on the well thought out design of the scheme itself but also raised two major concerns about the proposals.

His first concern related to the maintenance of open spaces, something which is often ignored in planning terms. The committee agreed with the need to address this but felt it would be more appropriately dealt with at at the next stage in the process.

Steve’s main concern related to the number of peak time vehicular movements which would go onto the Lang Stracht. He said, “The Lang Stracht is one of the poorest examples of road design in Aberdeen with traffic weaving in and out and the journey along its length currently taking about 15 minutes at busy times. There’s sufficient space to dual the road along most of its length and this was a lost opportunity in 1998 when the road layout was last changed.”

“When considering the full traffic impact we also need to look at the Maidencraig development and the cumulative impact on the Lang Stracht. We can’t look at this or indeed any other large scale development in isolation or we’ll gridlock large sections of our city, merely as a result of bad planning”.

“The Maidencraig Masterplan has reserved sufficient space along the Lang Stracht to allow for future dualling at that point. The previously approved and subsequently rescinded Morrisons application did likewise”.

“This Masterplan proposes no more than the widening of the road at the current roundabout and changing this from a roundabout to a signalised junction. No provision is made in respect of the huge increase in traffic volume using the Lang Stracht”.

“I have no issue with this development proceeding, as it’s a good development within its own boundaries, but this needs to be subject to essential infrastructure improvements being put in place. On that basis, I would ask Committee to include a requirement to dual the Lang Stracht into this Masterplan prior to any further progression.”

Concerns about the ability of the Lang Stracht were accepted by the committee, with much discussion on this point. However, it was felt that the traffic impact would be carefully considered as part of a future planning application, at which point appropriate mitigation could be more appropriately considered.

Steve said, “Although I was looking for a much stronger commitment at this stage in the process, there was certainly consensus amomgst members that there would be a significant volume of traffic emanating from this development and this would require further scrutiny at the next stage of the process.”

“I would urge local residents to have their say as part of the consultation process, which runs until 29th April 2014” The consultation can be accessed here.