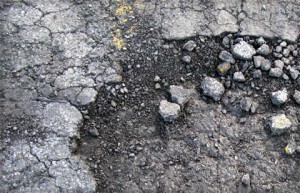 Aberdeen’s Liberal Democrat councillors today called for the City Council to invest an extra £2.5 million in repairing the city’s crumbling roads and pavements.

The move came at the 6 May meeting of the council’s Finance, Policy and Resources Committee after the council’s Head of Finance reported that the council had a surplus of £5.9 million at the end of March.

Ian Yuill, Leader of the Liberal Democrats on Aberdeen City Council, said “Thanks to hard work and prudent management by council staff, the council had a surplus of £5.9 million at the end of March 2014. The Liberal Democrats believe £2.5 million of that should be invested in making long-term repairs to Aberdeen’s crumbling roads and pavements. We believe the balance of the surplus should be used to repay some of the council’s long-term ‘capital’ debt.

Local councillor Steve Delaney said, “Whilst I welcome the £0.5 Million additional investment which was agreed, our proposals would have added a further £2 Million, more than doubling this year’s inadequate budgetary provision for roads and pavements.”

“The extra £2 Million was certainly affordable. It was completely irresponsible of Labour, Conservative and SNP councillors to sit back and watch Aberdeen’s roads and pavements continue to crumble, given that they had the money to make a difference and they chose not to use it.”