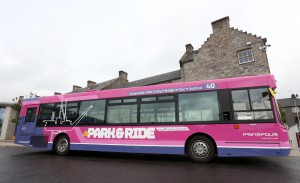 Steve Delaney, Liberal Democrat councillor for Kingswells, today met with the Public Transport Unit at Aberdeen City Council. The purpose of the meeting was two-fold, to discuss process and timelines but also for a briefing on what the Council is doing to try to ensure that Kingswells is not left without a bus service. The main points coming out of the meeting were as follows.

Private bus companies such as First can choose to axe routes at their absolute discretion and the only legislative requirement is that they give notice to the Traffic Commissioner for Scotland. The required notice period is 70 days, suggesting they will start the process between 17th and 30th October to meet their stated intention that “we will withdraw all services from Kingswells Village and Park & Ride by the end of the calendar year”. This statement by First represents their intention to trigger this process, but the process has not yet started. First has confirmed this to be the case earlier today.

During the first 28 days of the formal process, the Council must analyse the impact of the proposals and submit their findings to the bus operator. Where a significant change such as this is proposed, Aberdeen City Council would normally consult with stakeholders such as councillors, MPs, MSPs, community councils, NESTRANS, major employers likely to be affected, and others. This would be done to compliment the Council’s response.

Following on from this, First Group, assuming they have not been persuaded to reverse their decision, will lodge notice with the Traffic Commissioner for Scotland. Provided the de-registration is accepted, the service will cease 42 days after that date.

Council officials are currently analysing passenger numbers and will be holding further talks with First Group and other operators over the next week or so. All potential solutions will be explored. One or more public engagement events will be run in Kingswells, led by the Council, with First Group in attendance. Details of how and when this will take place have yet to be finalised, but an announcement is expected over the course of the next week.

Steve said, “Much of the above is process driven, but there’s much going on by way of preparatory work in advance of formal notice being served. Officials are weighing up a number of possible solutions with a view to retaining a service in Kingswells”.

“This is the start of the process, not the end. Make your views known to the Council, First Group and the Traffic Commissioner for Scotland. They need to fully understand the human cost of withdrawing services from Kingswells”

“Should it not be possible to maintain a commercial service, the Council has a duty under the Act to consider the impact such a withdrawal of service would cause. However, there is no statutory duty on the Council to provide a service and any such decision would need to be taken by councillors”.

“Please rest assured that I will continue to explore all options to retain a bus which services the whole of Kingswells, not just the Park & Ride”.