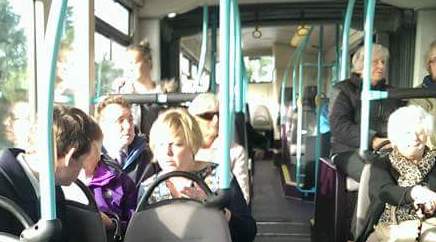 Kingswells residents today travelled on the X40 to FirstGroup HQ to hand over petitions with well over 2000 signatures objecting to the planning withdrawal of the X40/11 services from Kingswells at the end of this year.

Steve Delaney said, “I’d like to pay tribute to Pam Hudson, Aleen Shinnie, Eric Clark, Joe & Isabell Ritchie, Jim Henderson, Jeanette Taylor and the many other local people who took the time and effort to gather these signatures. Also thanks to everyone who made the trip to First today to hand over the petition”.

The event was covered by the Evening Express, Press & Journal, Northsound, Original FM, BBC Radio and STV amongst others and was supported by Grampian Senior Citizens Forum and Unite the Union. Grateful thanks to all for helping raise awareness of the campaign.

A number of the organisers joined Steve in a meeting with FirstAberdeen’s Operations Director, David Adam. In the meeting, which lasted about half an hour, residents raised concerns about the accuracy and methodology used to gather passenger numbers. It was also conveyed to First that they had a moral obligation to provide services to all areas of Aberdeen.

Discussion centred around people’s inability to get to and from their workplace and the impact on elderly and disabled people who will be unable to attend medical appointments and may become socially isolated. A number of other concerns raised by local people were also aired.

Mr Adam confirmed that the service would be reviewed again in December with respect to NHS parking permit holders using the X40 during the closure of ARI’s car park. However, he did not commit to extending the service, even until July 2017, when the new car park at ARI is due to be completed.

Steve said, “I appreciate Mr Adam having taken the time to meet with us. He politely listened to our concerns and agreed to look further into passenger numbers and how these had been collated. He also asked us to encourage people to attend next week’s consultation events”.

“We left convinced that First’s decision to withdraw services from Kingswells was pretty much a done deal. However, it is vital that residents attend next week’s consultation events as the Council will be taking note of all concerns and will take cognisance of these in their response to First”.

“If indeed First do withdraw the service, your comments may well be used to inform the social need component of any new service, so please don’t walk away in disgust (as tempted as you may be) as we all need to work together on this”.