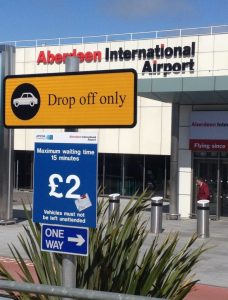 Aberdeen City Council’s Licensing Committee met on 25th October 2016 to consider a review of taxi fares in Aberdeen. It was agreed there would be no change to the existing tariff structure, which is to be reviewed and reported back to committee. Any proposed changes are likely to be introduced at the next usual review of fares around April 2018.

However, the request to increase the airport drop off charge from £1 to £2 to recompense drivers for the increase brought in by Aberdeen Airport was approved.

Lib Dem councillor Steve Delaney, who spoke at the meeting asked the committee to write in the strongest terms to Aberdeen Airport requesting they drop the drop off charge. He also asked, and received assurances from the taxi trade, that passengers be advised they can request to be dropped off at the long stay car park to avoid paying the charge.

Steve said, “This charge is unjust. It’s not a parking charge, it’s a drop off charge with vehicles moving on as soon as they drop off their passengers. It’s no more than a cash cow for Aberdeen Airport and damages the reputation of the airport and the city. They should listen to their customers and scrap it now”.