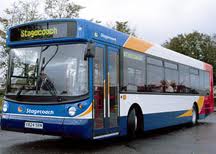 Following a request from Kingswells councillor Steve Delaney to the Council Leader to call an Urgent Business Committee to discuss the bus situation at Kingswells, some progress has been made.

It has been agreed that a report will go forward instead to the Finance, Policy & Resources Committee on 9th March.

Steve said, “The Council Leader contacted me today to advise of this decision, which I welcome. She agreed with me that ‘time was of the essence’ and I thanked her for moving this matter forward”.

“Hopefully the unanimity we saw in respect of my motion last October will prevail and we will see a real coming together by all councillors to ensure Kingswells residents can access public transport like everyone else in Aberdeen”.

In the meantime there has been another development following Stagecoach’s statement last week that they did not consider it commercially viable to offer a service to Kingswells village as they are now consulting on bus route changes planned for 1st May 2017. Two routes will call at the Kingswells Park & Ride as at present but with reduced frequencies.

The X17 will continue to call at Park & Ride site every day on a revised timetable. The first bus will be at 0549 Mon-Fri, 0619 Sat & 0816 Sun. Frequency will be every 15 minutes Mon-Sat and 20 minutes Sun for most of the day. The route will continue to serve Queens Road.

The 218 will call at Park & Ride site four times a day, representing a significant reduction in service over what is currently provided. The only 218 on offer during peak times is at 0732 with around 3 hours between buses. This route will continue to operate via Lang Stracht but will terminate at ARI.

With Kingswells Village Centre almost a mile from the Park & Ride and the northern edge of the village around two miles away, these services are of no use whatsoever to a large number of Kingswells residents.

The consultations will be held at St Nicholas Square, Aberdeen from 10am – 4pm and at Westhill Academy from 7.30pm – 9pm, both tomorrow 2nd March! More details and timetables.

Steve said, “This is becoming farcical now. The number of Stagecoach buses operating from the Park & Ride has been halved during morning peak times and, though they are now offering a service to the village, there’s no morning peak service. They are clearly failing to provide services at the busiest times of day when people most need them”.

“If this is Stagecoach’s idea of making the route commercially viable, they are clearly having a laugh at the expense of Kingswells residents. To turn down business during morning peak makes no business sense at all. As well as forcing those who do drive back into their cars, not to mention the increased congestion, this is leaving non-car owners unable to get to work and children who go to school in the city centre unable to get to school”.

“Clearly a 60-90 minute service to Kingswells village with no morning peak service, no evening service and no weekend service completely fails to address the needs of local people. I have already been in touch with Stagecoach asking them to clarify their position but as of today’s date they have not responded. I therefore have no option but to call on Aberdeen City Council to provide a supported service which addresses the social and economic needs of Kingswells.