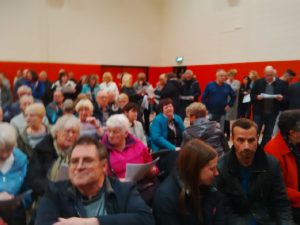 The public meeting to discuss bus services in Kingswells was held on 30th March and was attended by over 250 people. Clearly nobody was happy about the No. 94 bus service as it doesn’t meet anyone’s needs.

It was confirmed by Council officials that the No. 94 service has been contracted to run for AT LEAST five months. A report is to be brought to committee in June, looking at future options for Kingswells.

Residents were angry that the service on offer does not adequately cover morning and evening peak periods as well as omitting evenings and weekends. People were also concerned about how to get to and from work and medical appointments.

The Council’s Transport Spokesman repeatedly referred to a recent decision to look into the possibility of the Council running its own bus service and also of possible changes in the forthcoming Transport Bill. Neither of these initiatives could be progressed in the short term, so they were in effect offering no solution (and perhaps raising false hope) with respect to the immediate issues faced by Kingswells residents.

Steve Delaney told meeting that the service on offer sells Kingswells short and a permanent solution must not be “thrown into the long grass” while the Council prevaricates over its own bus company or waits for possible regulatory changes. He also expressed his frustration that the prospect of this situation arising had not been budgeted for and that it had taken more than two weeks to progress matters to committee in respect of decision so close to the termination of the X40 and No. 11.

Afterwards He said, “I share the annoyance felt in Kingswells that councillors failed to back the proposal I put forward to allocate funding and go to tender immediately. This was intended to minimise the use of the No. 94 and introduce a standalone service sooner than is currently possible”.

“What we now have is the hiatus brought about by the council elections, which I had tried to avoid, and a decision, if we’re lucky, in June. In the meantime, are Kingswells residents just meant to sit back and wait?”

“Please rest assured I remain furious about this and I remain committed to ensuring that this inadequate service is replaced by one which runs 7 days a week including evenings, at the earliest possible opportunity”.