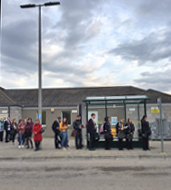 This week has been particularly challenging for Kingswells residents who rely on the X17 to get to work, with major holdups being experienced in the morning peak on Monday, Tuesday and Wednesday. As a result, a large number of people arrived at work late on these days. Added to this is the long running issue regarding a lack of capacity on buses from mid afternoon onwards heading back from the city centre, often resulting in people being unable to board and having to wait for the next bus.

Wednesday’s issue relating to the 0728 was as a result of traffic congestion in the city centre and the significant delays this had caused. As a result, the bus missed out the Park & Ride to make up time, which is a concern, given that bus operators are required to adhere to registered routes. Other issues, including a number in past weeks, have mostly related to a lack of capacity at certain times to accomodate Kingswells passengers following earlier pickups in Westhill.

Steve said, “I have drawn these issues to the attention of both Aberdeen City Council’s Public Transport Unit and Stagecoach. I have as a result received assurances from Stagecoach’s MD that he is aware of the situations and looking art how best to address matters. In the meantime he has arranged to put in place a double decker on specific runs to assist with capacity issues until a longer term solution is identified. This is in the process of being arranged”.

“I fully accept that sometimes buses can get held up as a result of circumstances beyond the control of their operators. However, having seen the queues on Wednesday morning (pictured above) and heard of the difficulties experienced by residents three days in a row, it was clear that swift action was needed”.

“Should such an issue arise again, please contact Stagecoach directly and copy your complaint to myself so I can follow it up with them”.