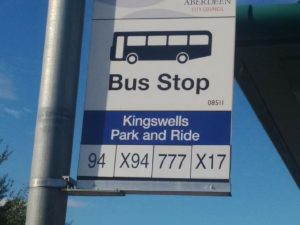 Kingswells residents are quite rightly raising concerns over delays to the introduction of a new bus service.

The current shuttle bus works for some people but not for others, dependent on where they need to go and when. Even when someone is able to use the service, journey times are laboriously long, often requiring three buses to reach their destination. Matters are further compounded with late running buses (both Central Coaches and Stagecoach), overcrowded Stagecoach buses and missed connections.

The report to councillors in September read as follows, “It is considered that a service should be supported with a 30 minute peak time service daytime, a minimum hourly service off-peak and in the evenings between 06:00 to 23:00 Monday to Saturday and an hourly service on Sundays, between 08:00 to 22:00. It is recommended where possible for any service to travel via Lang Stracht and Westburn Road as the feedback from the community has highlighted the importance of this link; however when doing so consideration would have to be given to the availability of funding”.

It was agreed at that meeting that a service running 7 days a week be put out to tender with an indicative timescale for tenders to go out in October and the new service to commence in January. For various reasons this has not progressed, but matters are now in hand.

Lib Dem councillor Steve Delaney said, “I discussed matters further with officers just before the Christmas break and can advise as follows. The preparatory work for issuing tenders has now been completed. Tenders will be issued in January and the outcome should be known in the second half of February. The current target commencement date for a new service to commence is 1st April 2018”.

“In March 2017 I put forward a proposal to go out to tender for this service immediately with the shuttle bus running on a month to month basis pending completion of the process. That was rejected in favour of a temporary shuttle bus service which was to run for up to one year. It took until September to get a decision to progress what was originally suggested in March and we’re still no further forward”.