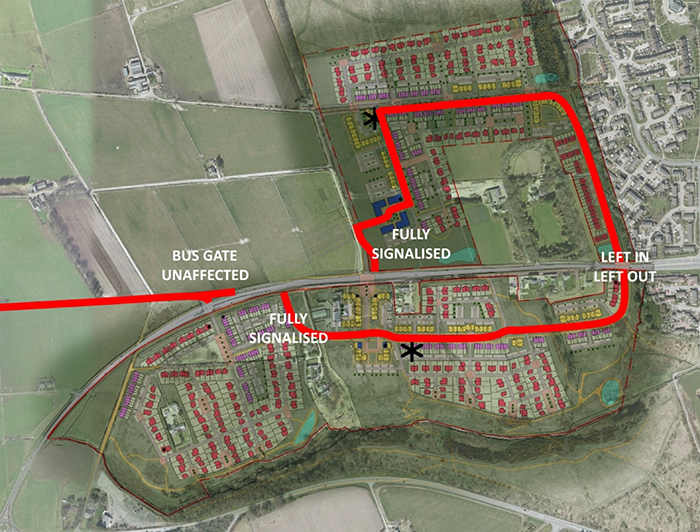 The current signalised junction at the entrance to the new build properties at Maidencraig will be removed at an unspecified future date and replaced by two signalised junctions, one at Dobbies, the other on the opposite side of the road between Dobbies and the bus gate.

The result of this being that residents will only be permitted to turn left onto Lang Stracht from the current east signalised junction and will need to travel through the development in the wrong direction to one of these two new junctions to turn right and head into town.

Furthermore, these two new junctions will take the place of the single junction which had been specified in the Maidencraig Masterplan, resulting in yet another set of traffic lights on Lang Stracht.

Local councillor Steve Delaney had asked the Planning Committee to refuse the application. He said, “I have to agree with the objectors as this proposal would result in them having to heading west when wanting to go east and face significant hold ups at peak times. Also, the staggered west junction was certainly not in the original plans and it breaks up the inter-connectivity throughout the site, which is not in the interests of those who live there”.

“With this staggered arrangement residents will come out of the scheme further west and much nearer to the roundabout at the end of the Lang Stracht than to the eastern side of the site. This roundabout is a bottleneck at peak times with significant delays and will only get worse as a radial route to the AWPR and with the addition of traffic from Maidencraig, so the extra traffic heading towards the roundabout will get stuck stuck here, impeding easy access to Kingswells, the AWPR and further afield from Lang Stracht”.

Steve went on to emphasise the additional hold ups and congestion an extra set of traffic lights would cause on this short stretch of road. He also highlighted safety concerns if residents decided to ignore the left in, left out regulation and turn right anyway, cutting across two opposing traffic flows on Lang Stracht. He advised councillors that the signalised junction was currently in place and removing it would be a retrograde step.

He continued, “My biggest concern is that a failure to address capacity issues on the Lang Stracht will grind this road to a halt, not in 10 or 20 years but very much sooner. It’s already near gridlock for a spell during morning peak. For years I’ve been calling for the council to dual the Lang Stracht but instead we have a proposal which seeks to exacerbate traffic flow on this route, not improve it”.

The committee did not support Steve’s call to scrap the proposals, instead voting to remove the signalised east junction and therefore the ability to turn right, when 400 houses are built, and to introduce two staggered signalised junctions further west in place of single junction originally planned at Dobbies.