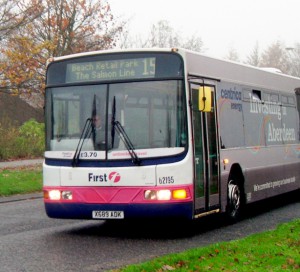 The main changes to the current 14/15 service which serves Kingswells are as follows:-

The current No 14/15 service is to become the No 11 and will follow the normal route into the City Centre, then pick up the present No 16 route and terminate at Springhill. Unfortunately the daytime frequency remains as dire as it is at present, running every 30 minutes. The main changes which may be of interest to Kingswells residents relate to the proposed route through the village. Please note the original proposal (as shown on the linked map) was designed to miss out the Fairley Road link but this has now been added back to the route.

Steve said, “I have raised particular concerns with First regarding the removal of Fairley Road from the route. There are a number of elderly residents in this area and, for many, this is their only means of  transport. It  would also appear that First  may not have factored in the 120 new houses planned for West Huxterstone when proposing this change. Strong representation from Kingswells Community Council, local residents and myself has resulted in this vital section of the route being retained. I would commend FirstAberdeen for their commonsense approach in this respect”.

He continued, “The half hourly daytime service to Kingswells remains unacceptable. I have made this clear to FirstAberdeen and you can rest assured I will continue to press for better bus services for our area. However, there are two distinct improvements proposed over the current level of service. The 30 minute service will operate until approximately 2200 (with the last bus leaving the City Centre at about 2300) which is a much needed improvement over the current hourly service in the evenings. The re-introduction of the late night buses to Kingswells at the weekends is also welcomed”.