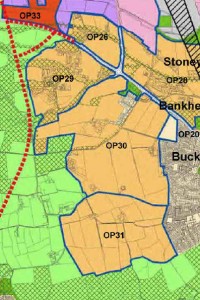 The Newhills expansion is currently at the Development Framework (pre Masterplan) stage. The proposals involve the building of 4400 homes between Bucksburn and Kingswells. The consultation runs from 17th March 2014 until 29th April 2014.

Kingswells/Sheddocksley/Summerhill councillor Steve Delaney spoke at the meeting. Whilst complimenting the proposals overall, he raised specific concerns about school capacity.

He said, “I’m particularly concerned that we’re asked to accept a figure of one secondary school child per 7 households as being reasonable. Unless we’re intending for this to be an area primarily for older people, the figure seems a bit low and I’d ask that we re-visit this as part of the Masterplanning process. A failure to recognise sufficient capacity will result in the loss of a developer funded new build school and over-crowding at existing schools, so we need to get this right.”

He continued, “Similarly there needs to be appropriate arrangements but in place for the adoption or ongoing management of open spaces to avoid the issues we see elsewhere across the city with some areas being badly neglected as a result of unenforceable provisions in this respect. I’d therefore ask that this requirement be fed into the Masterplanning process.”

A number of other committee members also echoed both concerns and it was agreed that these would be looked at further as the process goes forward.

Steve said, “This process remains at an early stage but it’s important we get things right as we only have one opportunity to do so, but getting it wrong will have long term consequences. I’m happy to see this go out for public consultation but will be keeping a close eye on these proposals as they go through the various stages. I would therefore encourage people to look at the document and make their views known.”

The consultation can be found here.