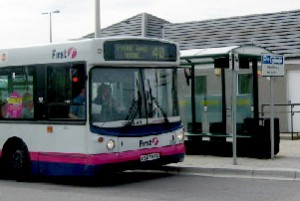 A proposal for a one-off maintenance programme of works at the Park & Ride site was turned down by Labour, Conservative and Independent councillors on 14 May 2014, with the SNP not even bothering to vote.

It was part of a raft of measures brought forward from monies raised by bus lane enforcement cameras. These monies can only be used for specific projects and the Park & Ride site was one of these. Instead the cash is being diverted to parking controls n the city centre.

The upgrade would have included undertaking a re-fresh of the waiting rooms with areas being repainted and some worn seating being replaced. Potholes were to be filled and relining works undertaken. Some landscaping works were also planned as well as fencing repairs. The hope was that a revamp of the site along with additional bus service would have improved its usage and encouraged more people to use the Park & Ride.

Kingswells councillor Steve Delaney said, “This was an officer recommendation based on the need to upgrade the site and lack of funding to do so. Nothing political at all, so it should have progressed on the basis of established need. Anything which encourages more people to use public transport must be encouraged as more passengers helps build the case for more frequent services. This is an opportunity lost and one which I hope will not adversely impact on the viability of the site”