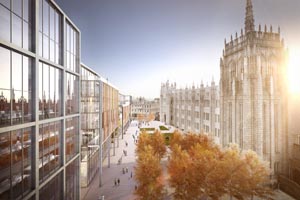 The replacement for St Nicholas House was approved by Aberdeen City Council by 23 votes to 18. The Council approved plans as set out in a report before councillors but without the creation of a civic square or consideration of the merits of pedestrianising Broad Street or indeed the possibility of opening up Castlegate to traffic or Queen Street turning left onto West North Street.

Local councillor Steve Delaney was unconvinced by the proposals as they stood. He was not against the development of the site, but rather the quality, scale and massing of what was proposed. Also the effect it would have on the setting of Marischal College and Provost Skene’s House.

Steve said, “This is poor quality architectural design which offers little by way of improvement on the former St Nicholas House. It’s unimaginative, uninspiring, a half baked carbunkle if you ask me. Aberdeen really deserves better”

“The original design was poor but without the civic square it offers nothing by way of compensation for the poor design. This may well re-appear as a concept but without including a condition regarding its funding by the developer it will either fall to the Council Tax payer to stump up or simply never happen. I consider this omission to be irresponsible”

“Whether or not pedestrianisation would work is something we may never know, which is unfortunate”.

Previous proposals by Steve to look at traffic management and the possible re-opening of the Castlegate and to seek to enhance the views of Provost Skene’s House were unanimously approved by the Council but now appear to have been swept aside.

Steve said, “I’m really disappointed with this poor design in the heart of our city and the potential loss of the public open space. It was a great opportunity to really make a difference to our city centre”.