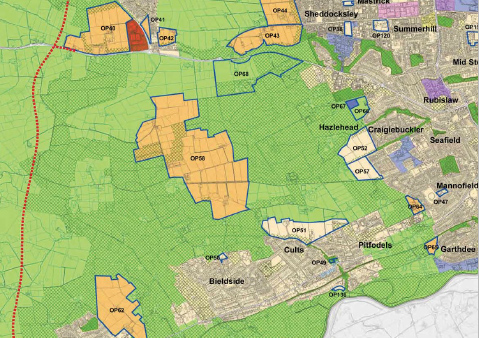 At its meeting on 8th October 2010 Aberdeen City Council approved the Countesswells Development. The proposal will see over 3,000 new homes to the south side of the A944 between the roundabout at the end of the Lang Stracht (where it meets the A944) and the Kingswells roundabout. For avoidance of doubt, the proposals refers to the large orange blob in the centre of the above map.

Local councillor Steve Delaney spoke in the debate. He expressed no specific concerns over the development within its own boundaries and said that much thought had gone into the layout, open space and town centre. His primary concerns related to the traffic impact arising from the development.

The junction with the Lang Stracht is to receive a major upgrade which will address current pinch point and increase capacity and throughput but Steve’s concern related to the funnel effect as most of this additional traffic would head down the Lang Stracht, which is ill-equipped to cope.

He said, “This proposal is aimed at getting the traffic out of Countesswells, but it fails to adequately address capacity issues elsewhere on the network. The Lang Stracht is already nose to tail during the morning peak. Unless we take drastic action, such a dualing the Lang Stracht, we will see residents in Summerhill and Sheddocksley struggle to get to work”.

The developer’s own figures suggest 82% of peak time movements will be northwards and the bulk will go down Lang Stracht as it’s the easiest and most direct connection, with some traffic also heading down the B1119 Hazlehead road leading to Queens Road. Steve described the peak time traffic from 3000 new homes as “significant” and in addition to the 750 homes planned for Maidencraig and phases 2-4 of Prime Four.

Steve continued, “Only junction improvements being considered for the Lang Stracht. I was filled with horror to read about “potential contributions” towards mitigation on Lang Stracht. Why only potential?”

“This is not sustainable development. Key infrastructure requirements are being ignored as is so often the case. Are we to gridlock whole communities in the name of progress or does Aberdeen deserve better?”