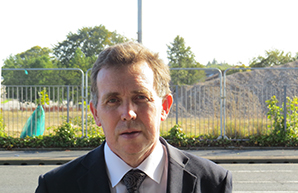 It was agreed after considerable debate and division that the preferred option was for 100% mid market rent with no provision of housing at social rent levels on the Summerhill site to address the needs of families on council and housing association waiting lists.

The report before councillors was brought as a result of an instruction from the August meeting, but this tight timescales has resulted in normal procedures being bypassed and councillors being provided with an outline business plan rather than a detailed one.

Lib Dem Housing spokesman Steve Delaney said, “I did not believe that we should be considering a proposal without a full detailed business plan which takes account of deliverability of all possible options for this site. We also needed a detailed analysis of projected school rolls and plans to mitigate any capacity issues but this too was unavailable”.

“I also had considerable concerns about the 100% provision of mid market rent which will do nothing to help low paid working families living in overcrowded conditions, something I was somewhat bemused to see being proposed by Labour councillors”.

In the normal course of events, due process dictates that a full technical business case should be completed and presented to the Corporate Asset Group and then considered by the Corporate Management Team. An officer recommendation is then be made and reported to the relevant committee. It was acknowledged this process was not followed in this particular case due to time constraints.

Steve also raised questions about the capacity of the Lang Stracht and how additional traffic could be accommodated, also how Hazlehead Academy could cope with additional pupils arising from these proposals. He requested further proposals be brought forward to a future meeting incorporating a mix of tenures with emphasis on including housing at social rent levels.

He continued, “Make no bones about it, mid-market rent is usually allocated on a first come first served basis, unlike social housing, so anyone who can afford the rent can apply. This would not exclude those who can afford to buy but may choose to rent”.

“There is no guarantee that these house will go to newly qualified nurses, teachers and other key workers who would otherwise struggle with private rent levels. This proposal does nothing to address the skills shortages we face as a city. Clearly this decision is a slap in the face to low paid families in Aberdeen as Labour instead build housing for those on modest incomes. This is not affordable housing and they should hang their heads in shame”.

“Surely there has to be a way that we can assist key workers without robbing those in greatest housing need of their only hope of living in a home that’s affordable to them. I even suggested we all get together to look at a possible way forward on the key workers issue working cross party, and that too was rejected. I’m deeply disappointed by this”.