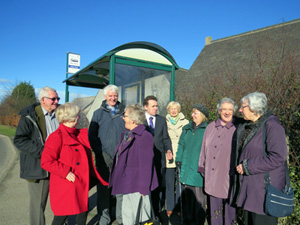 Local councillor Steve Delaney has been campaigning for improved safety on the A944 since his election in 2012. More recently he mounted an initiative to restore bus stops opposite Kingswells Church and beside the Five Mile Garage.

Recent action came about as a result of a decision taken by Stagecoach about a year ago to cease stopping to pick up or drop off passengers on the A944 between Hazlehead and Westhill other than at the Prime Four Business Park.

Related to this was the decision to remove the bus stop opposite Kingswells Church on safety grounds as a result of the widening of the A944. This has meant passengers can catch the X17 into town but can’t easily get home as the next bus stop is past the roundabout at the Prime Four Business Park.

Steve had put forward proposals for bus laybys, bus stops and signalised crossings at both Kingswells Church and the Five Mile Garage. Unfortunately Labour, Conservative and Independent councillors in a surprise move threw out the Kingswells Church proposal in June, instead calling for the followup report to look only at the Five Mile Garage, the lesser used of the two locations!

The report on the Five Mile proposal came to committee on 28th October recommending no action at this time as funding could not be identified to take it forward. Steve proposed the following, effectively reviving both proposals for future consideration and identifying a potential funding source. His proposal was as follows:-

3) be instructed to enter negotiations with the intention of securing developer contributions from future phases of Prime Four in order to deliver these necessary infrastructure improvements at no cost to Aberdeen City Council.

Steve said, “Whilst I accept this will not deliver the much needed infrastructure in the short term, it does compel the Council to investigate the possibility of these improvements being funded it by way of developer contributions as Prime Four expands. With no funding from Council sources this was the best possible outcome and I was pleased to secure unanimous backing for these proposals”.