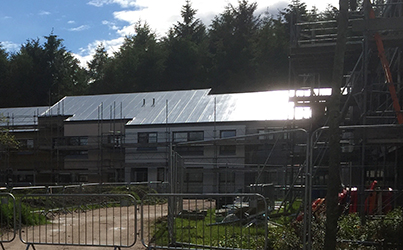 At long last work is due to re-start on building works at Lewis Court following the collapse of Muirfield in April this year. Since then the site has been abandoned with scaffolding still in place, abandoned paint pots and paint brushes, missing rain downpipes and the grounds unmaintained, with bushes and grass growing up over people’s windows.

Local councillor Steve Delaney, who has raised this repeatedly, brought the matter up at the Communities, Housing & Infrastructure Committee on 27th August 2012. He spoke of the shocking mess that people are surrounded by and called for works to be resumed as soon as possible, with the grounds being tidied up in advance of building works starting.

Steve said, “Lewis Court has become overgrown, like a jungle. It’s completely unacceptable expecting people to live in conditions such as these. The grounds have been neglected to such an extent that residents can’t even open their windows.Those who are not looking out at scaffolding or abandoned paint pots can’t see out at all for the height of the bushes or grass in front of their windows. This needs to be sorted out now”.

Assurances were given that building works are to resume on 14th September 2014 with the grounds being tidied up in advance as requested.