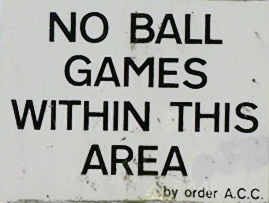 Aberdeen City Council has taken the decision to remove signage banning ball games across the city. All current signage is destined to be removed within the next 12 months and no new signs will be erected.

The decision was taken on the basis that these signs have no legal force, therefore no action can be taken against anyone who ignores the signs. In addition, it was also accepted that outdoor play should be supported and encouraged to foster team building and help tackle childhood obesity.

Lib Dem Group Leader Ian Yuill, supported by local councillor Steve Delaney had asked for a report back in six months identifying areas which are unsuitable for ball games with recommendations on how to manage these locations. In addition, the Lib Dems asked the committee to undertake an information campaign aimed both at those playing ball games and local residents, outlining what constitutes appropriate use of open space and ball play”.

Steve said, “Whilst supporting the sentiment of this proposal, I believe some basic safeguards should be put in place to reassure those who are subjected to unreasonable or ongoing anti-social behaviour. Those playing ball games need to respect local residents and their property. Anti-social behaviour and damage to property remain totally unacceptable and this decision must not be regarded as a free for all”

“Putting in place green space management for areas where it would be inappropriate to play with balls just makes sense. Similarly, an information campaign to outline what is acceptable and what is not, would have helped balance rights with responsibility and made it clear who to contact in respect of ongoing instances of unacceptable behaviour.

Disappointingly Labour, Conservative, SNP and Independent councillors took the decision to remove the signage without taking on board the Lib Dem proposals.