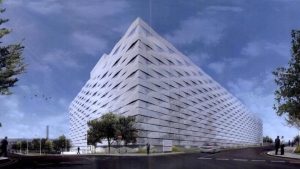 It has been confirmed that the long awaited construction works to build a multi-storey car park on the ARI site will commence on 24th October 2016. During this time there will be no visitor parking on site and very little staff parking. The construction works are expected to last until next summer. Although this will create difficulties for visitors getting to ARI, the underlying challenge is for NHS staff to get to and from work, especially those living at Kingswells and further afield.

NHS Grampian staff parking permit holders can show their permits to the bus driver allow them to travel free of charge on the X40 service during these works. However, this has been undermined by FirstAberdeen’s intention to withdraw the service from the end of this year. Local councillor Steve Delaney discussed matters with NHS Grampian earlier this week.

He said, “I was assured that NHS Grampian and FirstAberdeen are working together on this. They to meet on a weekly basis to review passenger numbers but First’s bottom line is that passenger numbers need to grow significantly. The position will be further reviewed in December as was previously advised to me by First’s Operations Manager. Needless to say, I will maintain regular contact with NHS Grampian as matters progress”.

“There is clearly a challenge for NHS Grampian to demonstrate an increase in passenger numbers, given the very tight timeline. We can all do our bit by using the bus more often and help boost the passenger numbers. Even if this only offers a reprieve until next summer, it would buy time to find a longer term solution for Kingswells. However, if increased passenger numbers were sustained, the threat may be lifted”.

“Personally I do not expect NHS staff on their own to be sufficient to give FirstAberdeen the passenger numbers they seek and I remain convinced of their determination to axe services to Kingswells. However, I would urge those of you who could use the X40 but don’t, to give it a try and help extend a lifeline to those in our community who would be hardest hit if it were withdrawn”.