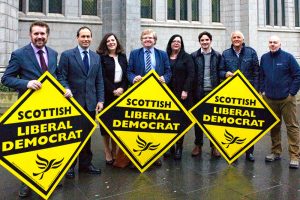 Liberal Democrats believe that local elections should be about important local issues and basic services vital to local communities. Their key priorities for Aberdeen over the next five years were identified as:

• Taking action to improve the education and life chances of Aberdeen’s children and young people.

• Improving transport within our city, including making a real start to repairing Aberdeen’s crumbling roads and pavements.

• Delivering, with partners, 2,500 homes to rent by 2022 with the emphasis firmly on social housing.

Key to delivering these aspirations will be achieving fairer treatment for our city and its citizens from the Scottish Government.

Liberal Democrat Group Leader Ian Yuill said, “Our commitment is to work with the citizens of Aberdeen and we aim to deliver for them.

“Sadly, over the last five years Aberdeen City Council has been controlled by a coalition of Labour, Conservative and “Independent” councillors who have inflicted the Marischal Square development on our city centre, allowed major council building projects to go over budget and over time and sought to pick fights with the Scottish Government.

“Our city, its citizens and business community deserve better. Over the next five years Aberdeen’s Liberal Democrat councillors will work to deliver the best possible services, to strengthen our city’s economy and improve people’s life chances and quality of life.

“We will focus on delivering the best possible local services for Aberdeen’s citizens and businesses. We will not use the council chamber to re-fight national political battles.”

“We will continue to oppose the SNP Government’s policies of centralisation and separation.

“Unlike other parties, we are not dictated to by the Central Belt and our priority will always be the interests of Aberdeen and its citizens.”