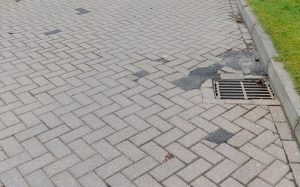 In recent years Aberdeen City Council has been repairing damaged areas in lock block roads with black tar. This has understandably angered local residents as it results in an unsightly blight on what had previously been an attractive road surface.

Local councillor Steve Delaney has raised this issue on numerous occasions in respect of Kingswells where there are a significant number of lock block streets. He said, “I’ve heard various reasons as to why lock block cannot be replaced with lock block (having been given different reasons at different times) but I remained unconvinced that it was either not possible or not cost effective to do so”.

The council agreed earlier this year to replace the cut-de-sac in Corse Wynd with lock block in order to determine the best way forward. These works have still to be carried out and the outcome will help inform a report going to committee next year. This report will look at the cost effectiveness of larger scale lock block replacement to determine the best way forward when it comes to the permanent replacement of these surfaces at the end of their useful life.

Earlier this month the council considered a policy for carrying out temporary repairs on streets with cobbles and pre-cast concrete blocks (which includes lock block). The proposal had been for all temporary repairs to be carried out using black tar as per the current practice. Steve instead proposed that lock block repairs should be carried out using the same or similar materials where it is feasible to do so. This was accepted unanimously by the committee.

Steve said, “I’m delighted that committee have instructed these repairs to be done using lock block whenever it is feasible to do so. The council has an obligation to address road defects which pose a risk to drivers and pedestrians so it was necessary to obtain agreement as to how this will be done in sensitive areas including conservation areas and lock block streets”.

“Unfortunately none of this changes the priority for road repairs. These will only be carried out if they meet the set criteria (as is the case at present) and the replacement of lock block road surfaces will continue to be prioritised for replacement in the same manner as all other streets in Aberdeen and assessed against the very limited roads budget”.

“However, what it does mean is that small localised repairs will now be done using lock block wherever possible. Larger scale repairs or repairs where the base material beneath the surface has significantly deteriorated or collapsed will still need to be filled with tar to protect the integrity of the road until such times as it can be re-laid or resurfaced. Each street will be consider